Pictures at an Exhibition

Ballet of the Chicks in Their Shells

The Great Gate of Kyiv

Since graduating from the Cleveland Institute of Music, Orfaly has performed with orchestras worldwide, including the Cleveland Orchestra, Los Angeles Philharmonic, and Frankfurt Radio Orchestra. He has composed a number of works for percussion, including his Concerto for Brass and Percussion and Divertissement No. 2 for timpani soloist and large ensemble. His The Mean Man’s March for solo xylophone and orchestra (2010), Cowboy Bill for narrator and orchestra (2012), and Breaking Light for five percussionists and orchestra (2015) were written for and premiered with the Sun Valley Music Festival. The composer writes: ”About fifteen years ago, I was walking around Balboa Park in sunny San Diego, where they have a wonderful outdoor bandshell with an organ. I happened to stumble in to the end of an organ concert where I heard a piece of music I had never heard before. I enjoyed this piece so much, I had to wait around to find the organist to ask him what it was. It turned out to be the Toccata from Widor’s Organ Symphony No. 5. I’ve always enjoyed this piece, and it plays heavily into the introduction of Sol Invictus. “The rest of this piece represents my first efforts at experimenting with an ‘American sound’—such as that of the music of Aaron Copland for example—along with the flair of Hollywood. There is no program for this piece beyond that. Hopefully it is music of optimism and joy.”

Commissioned by Peter Jaffe and the Stockton Symphony with the help of sponsors Jeffrey and Patricia Lindenberg, Sol Invictus (2011, 2020) was to have premiered in April 2020, but the pandemic intervened. We are thrilled that we can at last premiere Sol Invictus, a dazzling work by one of our own, that makes a wonderful addition to the orchestral repertoire.

Although it may sound incredible, this cure really helped me. Already at the beginning of the summer I began to compose. The material grew in bulk, and new musical ideas began to stir in me—far more than I needed for my concerto. By the autumn I had finished two movements of the concerto: the Andante [his generic term for any slow movement, in this case the Adagio sostenuto] and the finale—and a sketch of a suite for two pianos.

Rachmaninoff saw Dr. Dahl daily from January to April 1900. Whether Dr. Dahl’s method worked, or whether the fact that Dahl was also an amateur musician illuminated their conversations, or whether Rachmaninoff’s trip to Italy that summer provided resolve, the composer completed the second and third movements of the Concerto by autumn and was persuaded to premiere them on December 2, 1900. Encouraged by their success, he added the first movement, performing the entire Concerto at a Moscow Philharmonic Society Concert on October 27, 1901. He dedicated the Concerto to Dr. Dahl, to whom he remained eternally grateful. Dr. Dahl was at least once acknowledged publicly for his contribution when in 1928 he was known to be playing viola in the orchestra of the American University of Beirut in Lebanon, and he was “forced” by the audience to take a bow after the performance of the Concerto.

The Concerto is a captivatingly beautiful piece, fully deserving the remarkable popularity it has achieved. Each movement opens with a passage that starts out in a key removed from the main tonality, attaining it in each case with the movement’s principal theme. In the case of the first movement, it is the piano that begins with dark chords characteristic of Rachmaninoff, linked by several commentators to the age-old Russian love of the sound of enormous bells. In a favored technique of Romantic composers, the entry of the recapitulation is embellished, here by the piano’s brilliant counterfigure.

The slow movement’s introductory passage modulates from C minor, the key of the first movement’s close, to the distant new key of E major for the main theme. The more rapid middle section of the movement might be seen as a foreshadowing of the Third Piano Concerto, in which the slow movement contains a scherzolike contrasting middle section. The exquisitely glowing close of the movement especially touched Rachmaninoff’s teacher Taneyev, who upon hearing it in rehearsal uttered the word “genius”—a word he did not use lightly.

The finale’s introduction begins in the slow movement’s key (E major), moving eventually to the home key (C minor). The composer hints at first movement materials both in the orchestral introduction and in the piano’s entry—interesting in light of the order of composition of these movements. Several times in this movement the soloist erupts in cadential flourishes—evidence perhaps of the fact that Rachmaninoff’s confidence had returned. Rachmaninoff’s lyrical gift has caused his melodies to be appropriated by many songwriters. A case in point is the almost too familiar but still alluring second theme, first played by the oboe and viola. Like the first movement, the finale contains a concealed recapitulation. The movement ends in a blaze of pianistic glory and orchestral resolve.

Pictures at an Exhibition 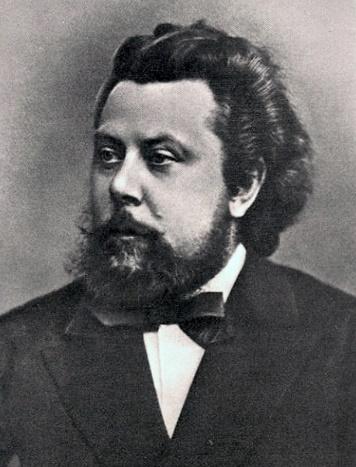 Vladimir Stasov, who championed everything “progressive” and “truly Russian” in all forms of art, held gatherings of painters, sculptors, musicians, and writers at his home, and it was probably there in 1870 that Musorgsky met the lively architect, designer, and painter Victor Alexandrovich Hartmann. The great friendship that sprang up was cut short, however, when three years later Hartmann died suddenly of an aneurism. It was the grief-stricken Musorgsky who informed Stasov in Vienna by an almost incoherent letter that paraphrased King Lear: “What a terrible blow! ‘Why should a dog, a horse, a rat have life,’—and creatures like Hartmann must die!”

In Hartmann’s honor, Stasov organized a memorial exhibition for the spring of 1874 that featured not only watercolors and drawings, but architectural sketches and designs for jewelry, useful objects, stage sets, and costumes. The display inspired Musorgsky’s famous Pictures at an Exhibition, a piano piece that depicts ten works in the exhibition, with an eleventh “picture,” Promenade, which portrays the composer himself walking through the gallery.

Uncharacteristically enthusiastic about his progress, Musorgsky bubbled over to Stasov in a letter dated “Wednesday, some date or other in June ’74”:

Hartmann [Pictures at an Exhibition] is boiling as Boris [his opera Boris Godunov] boiled—the sounds and the idea hung in the air, and now I am gulping and overeating, I can hardly manage to scribble it down on paper. Am writing 4 numbers—with good transitions (on “promenade”). I want to do it as quickly and reliably as possible. My physiognomy [he was far from dainty] can be seen in the intermezzi. I consider it successful so far.

At this point the four he had worked on were Gnomus (The Gnome), Il vecchio castello (The Old Castle), Tuileries, and Bydlo (Cattle). He mentioned in a postscript that he wanted to add “Vitiushka’s Jews” (Vitiushka was Hartmann’s pet name), referring to two sketches, “A rich Jew wearing a fur hat” and “A poor Sandomierz Jew,” that he had lent to the exhibition. Musorgsky completed the entire composition in a single burst of twenty days, dedicating it to Stasov, whose preface to the original edition follows:

The introduction bears the title “Promenade.”

No. 1. Gnomus: Sketch [for a nutcracker as a Christmas tree ornament] depicting a little gnome, clumsily running on crooked legs.

No. 2. Il vecchio castello: A medieval castle before which stands a singing troubadour.

No. 3. Tuileries. Disput d’enfants après jeux [Quarreling of children after play]: A walkway in the Tuileries gardens with a swarm of children and nurses.

No. 4. Bydlo: A Polish cart on enormous wheels, drawn by oxen.

No. 5. Ballet of Unhatched Chicks: Hartmann’s sketch of costumes for a picturesque scene in the ballet Trilby. [The exhibition catalog describes them as “canary chicks, enclosed in eggs as in suits of armor” with “heads put on like helmets.”]

No. 6. Two Polish Jews, rich and poor. [Musorgsky’s original title, “Samuel” Goldenberg und “Schmuÿle” (Schmuÿle is Yiddish for Samuel), represents his fusion of two Jewish stereotypes into one musical depiction. It has often been suppressed as derogatory in favor of Stasov’s “cleansed” title.]

No. 9. The Hut on Fowl’s Legs (Baba Yaga): Hartmann’s drawing depicted a clock in the form of Baba-Yaga’s hut but on fowl’s legs. Musorgsky added the witch’s flight in a mortar.

No. 10. The Heroes’ Gate at Kyiv: Hartmann’s sketch was his design for a city gate at Kyiv in the ancient Russian massive style with a cupola shaped like a Slavonic helmet.

Musorgsky quotes the Promenade again in the finale, The Great Gate of Kyiv, as if he himself has joined the grand procession in Hartmann’s rendering. Hartmann had entered what he considered his finest work into a competition for a gateway design to commemorate Czar Alexander II’s miraculous escape from assassination in 1866, but the competition was called off for lack of funds. In its original piano version, Musorgsky’s Pictures at an Exhibition had been somewhat overlooked, but it was immensely popularized by Ravel’s orchestration, commissioned by Serge Koussevitzky and premiered in Paris on May 3, 1923. More than thirty others have tried their hand at orchestrating the work—among them Rimsky-Korsakov and Leopold Stokowski—yet it is still best known and beloved in Ravel’s arrangement.

Venezuelan pianist Gabriela Martinez has a reputation for the lyricism of her playing, her compelling interpretations, and her elegant stage presence. Her playing has been described as “magical . . . with a cool determination, a tone full of glowing color and a seemingly effortless technique” (Los Angeles Times and “versatile, daring and insightful” (New York Times ).

Passionate about new music, Gabriela has premiered works by many composers including Mason Bates, Sarah Kirkland Snider, Paola Prestini, Jessica Meyer, and Dan Visconti. Gabriela’s debut album, Amplified Soul, was released on the Delos label and was recognized with a Grammy Award for Producer of the Year, David Frost.

Gabriela won first prize at the Anton G. Rubinstein International Piano Competition in Dresden and was a semifinalist at the 12th Van Cliburn International Piano Competition, where she also received the Jury Discretionary Award. She is a fifth-generation female pianist, who began her piano studies in Caracas with her mother, Alicia Gaggioni. She then attended he Juilliard School, where she earned her Bachelor and Master of Music degrees as a full scholarship student of Yoheved Kaplinsky. A fellow of Carnegie Hall’s Academy and a member of Ensemble Connect, Gabriela concurrently earned her doctorate studying with Marco Antonio de Almeida in Halle, Germany.